n June 6, the 75th anniversary of Operation Overlord was celebrated, the codename for the Normandy landings, which until today remains the largest logistic mission in history. Specifically, the D – Day has used 7,000 ships, 1,200 aircraft and 10,500 vehicles of all kinds, not counting the 1,500 tanks and 5,000 vehicles caterpillar and half-trak who participated in this military action. Three-quarters of a century later, some of the unarmored vehicles that took part in the landing, and others that were significant on both sides, have become iconic symbols outside the conflict since then.

In 1940, the United States Army needed a small vehicle with four drive wheels that could be used for different tasks and missions, with outstanding performance capabilities, stability, autonomy, reliability, and low maintenance. This is how the famous Jeep was born , although with another name. Bantam, a small company in Pennsylvania, developed the first prototype and even built 2,675 units. But the war demanded of many vehicles in a short time, so the Army proposed to the Willys-Overload and Ford Motors Company companies, much more capable, to make their own proposal based on Bantam’s car. Thus were born the Willys MB and the Ford GPW, models capable of reaching 105 km / h, travel 380 kilometers without refueling and move with ease the 1,040 kilos they weighed. 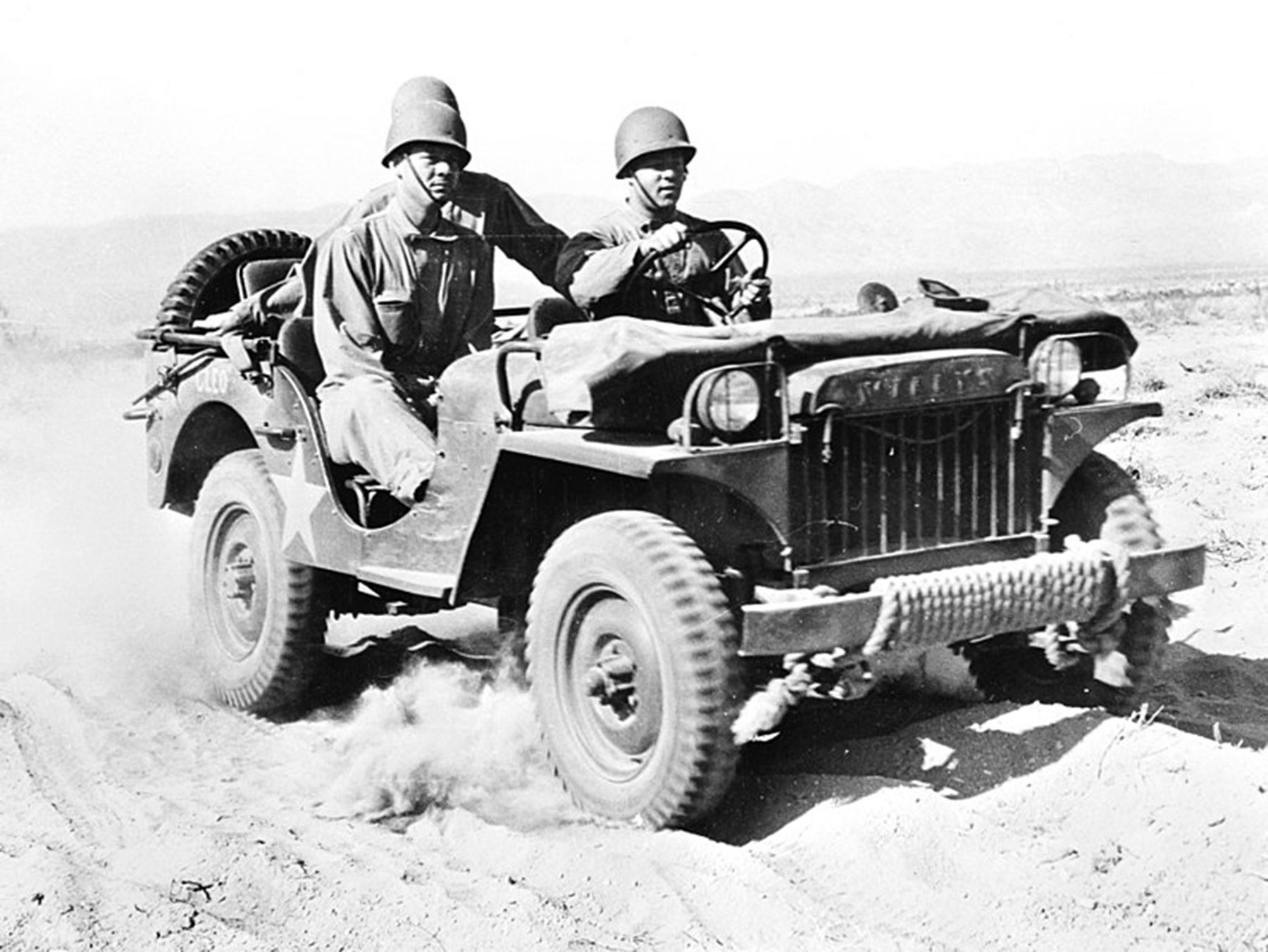 Bantam’s model was the one with the lowest cost and the most efficient, but the influences of the big companies in the Government made the production of the most expensive prototypes granted. At least Willys added more power and Ford more comfort.

As for the nickname Jeep, there are two theories: one says that it comes from a derivation of the acronym of GP (general purpose or general-purpose, in Spanish) which was the military specification of the vehicle; of yipi stayed in a jeep. The other theory states that it comes from Eugene the Jeep, a Popeye character, specifically an Olivia pet, with fantastic powers. In one way or another, the Jeep has since become the symbol of 4 × 4 vehicles, more for peace than for war.

Welbike, the minimoto that was parachuted

The British brand Excelsior Motor Co., known for its motorcycles, was responsible for building a motorcycle that could be launched at the same time as the paratroopers who would throw themselves on French soil on D-Day. It is the Welbike, a tiny motorcycle, of only 32 kilos of weight, simple to handle and quick assembly, as it was thrown disassembled in a small container. In fact, he only had one gear and the gas tank had to be pressurized manually. Of course, the performance was not bad: with an autonomy of 145 kilometers and a maximum of 45 km / h contributed to the rapid deployment of troops. Small but bulky. 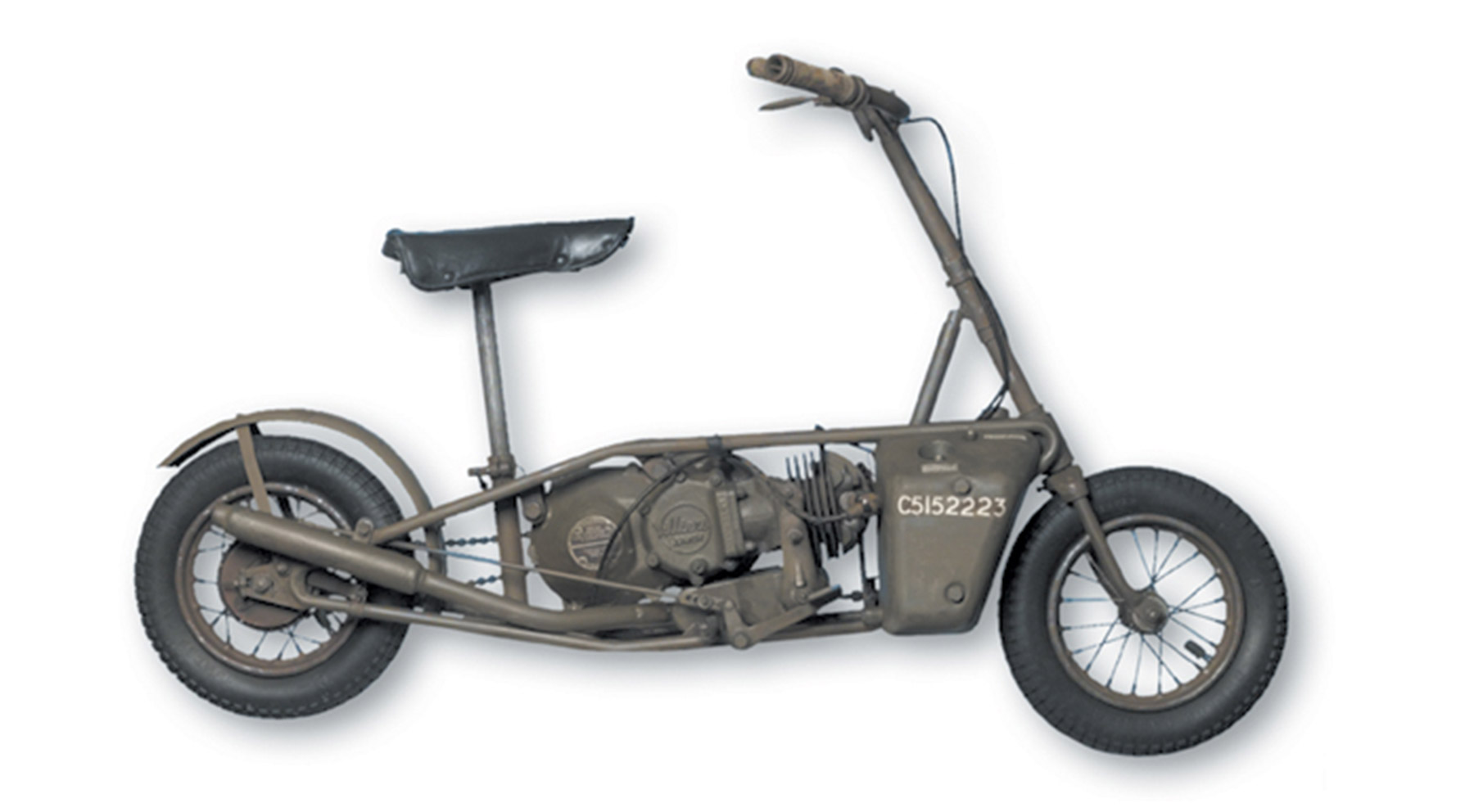 After the conflict, this minimoto began to be marketed under the Corgi brand, adding elements that had been suppressed or reduced, such as the fuel tank, which now acquires a normal size. In addition, it was painted red and the Indian Motorcycles logo was incorporated to have greater acceptance in the US market.

The British provided another of the key vehicles for Operation Overlord, the Bedford MWD GS.  Although it belongs to the American company General Motors, it was manufactured in the United Kingdom. The MWD was intended for infantry battalions of the British Army, being small, stable, easy to use and with good autonomy: more than 400 kilometers at a maximum speed of 80 km / h. In addition, it could carry up to 10 soldiers, which meant a lot for the time.

But if we talk about troop and material transport, the one that gave the best result on D-Day was the General Motors Company CCKW of the US Army, which, like the Jeep, also had a nickname, in this case, Jimny. From 1941 to 1945 800,000 units were manufactured in 58 different versions, and it was so useful that it was used both in World War II and in the 1950 Korean War, and even some countries such as the Philippines, Taiwan, and Norway have used them until the 1990s 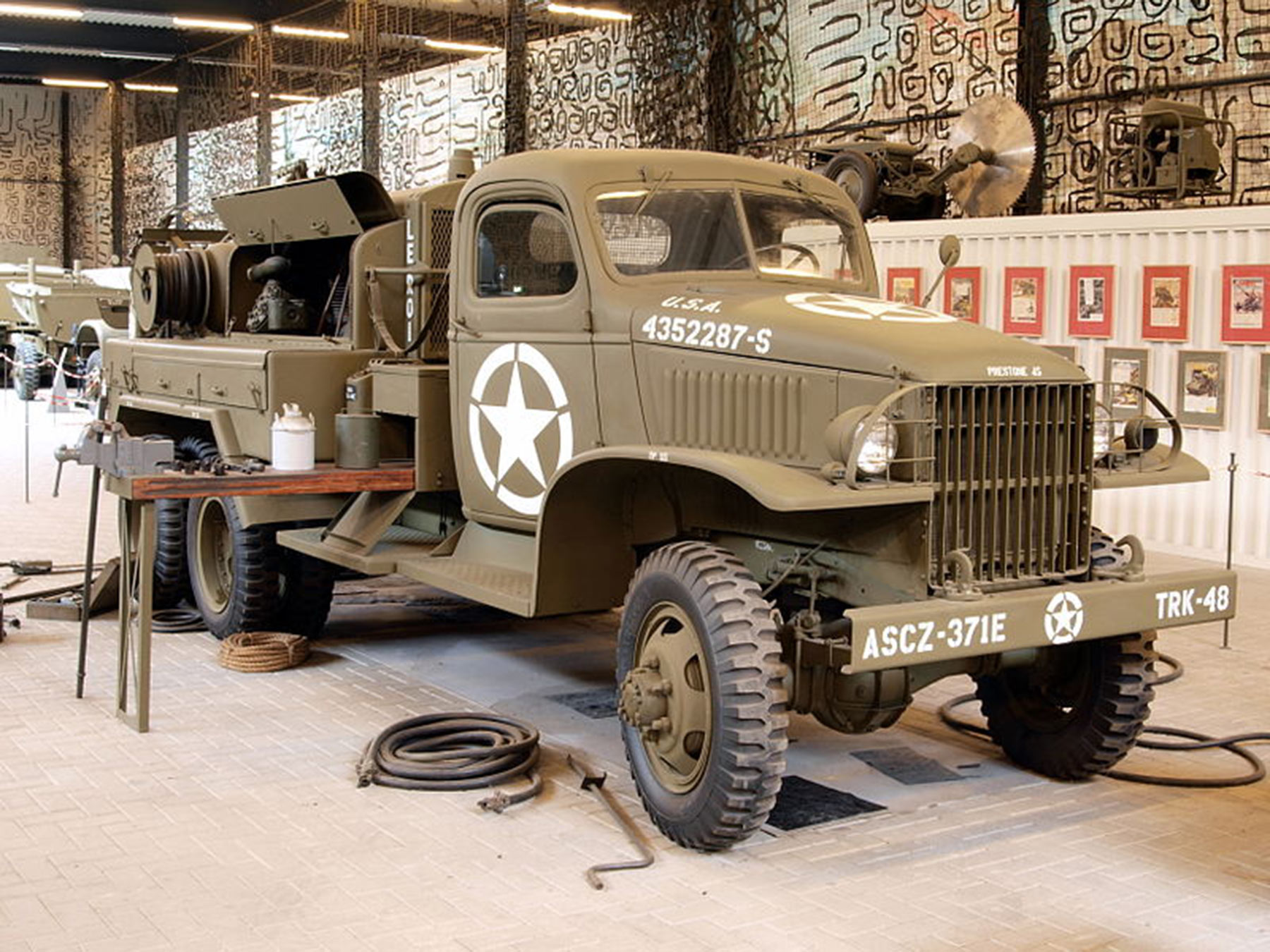 A unit of the GMC CCKW.

The success of the GMC CCKW was the enormous load capacity it could house under its characteristic canvas. It also had a six-wheel drive, which could even disconnect the front axle if it was not necessary to use it. As for the engine, six cylinders in line, 4.5 liters and 103 hp. The change had five speeds in high and many others in gearboxes and could reach a speed of 72 km / h.

Taking into account the casualties of the Normandy landings, 10,500 alone on the Allied side (counting dead, wounded, missing or prisoners), it was necessary to have transport units for the injured that would guarantee their withdrawal to the rear. The use of Dodge WC54 as an ambulance had a lot to do with it here. A light truck, fast (up to 85 km / h), with all-wheel drive, based on the Dodge T214 Beep chassis, which had a longer wheelbase and a tight suspension to smooth the ride and generate greater comfort for the wounded.

Inside there was room for between four and seven patients plus a doctor. If the stretchers were used as folding bunk beds, they could be transported lying down to four soldiers. Another contribution to facilitate the evacuation of the injured was the folding step to allow easier access for stretcher-bearers and injured soldiers. Given that this had to be done quickly because of the state of the wounded and under the danger of enemy fire, it is no small matter.

Both sides, a motorcycle model

Operating from the European Eastern Front was the IMZ-Ural, which are not of Russian origin but are a copy of the German motorcycle  BMW R71, known for being the motorcycles used by the Africa Corps, taking advantage of the Russian-German non-aggression treaty of 1939. The name of Ural comes precisely from the end of that treaty since when Russia entered the Second World War, the production of this motorcycle was taken to the Urals to escape the German bombings. 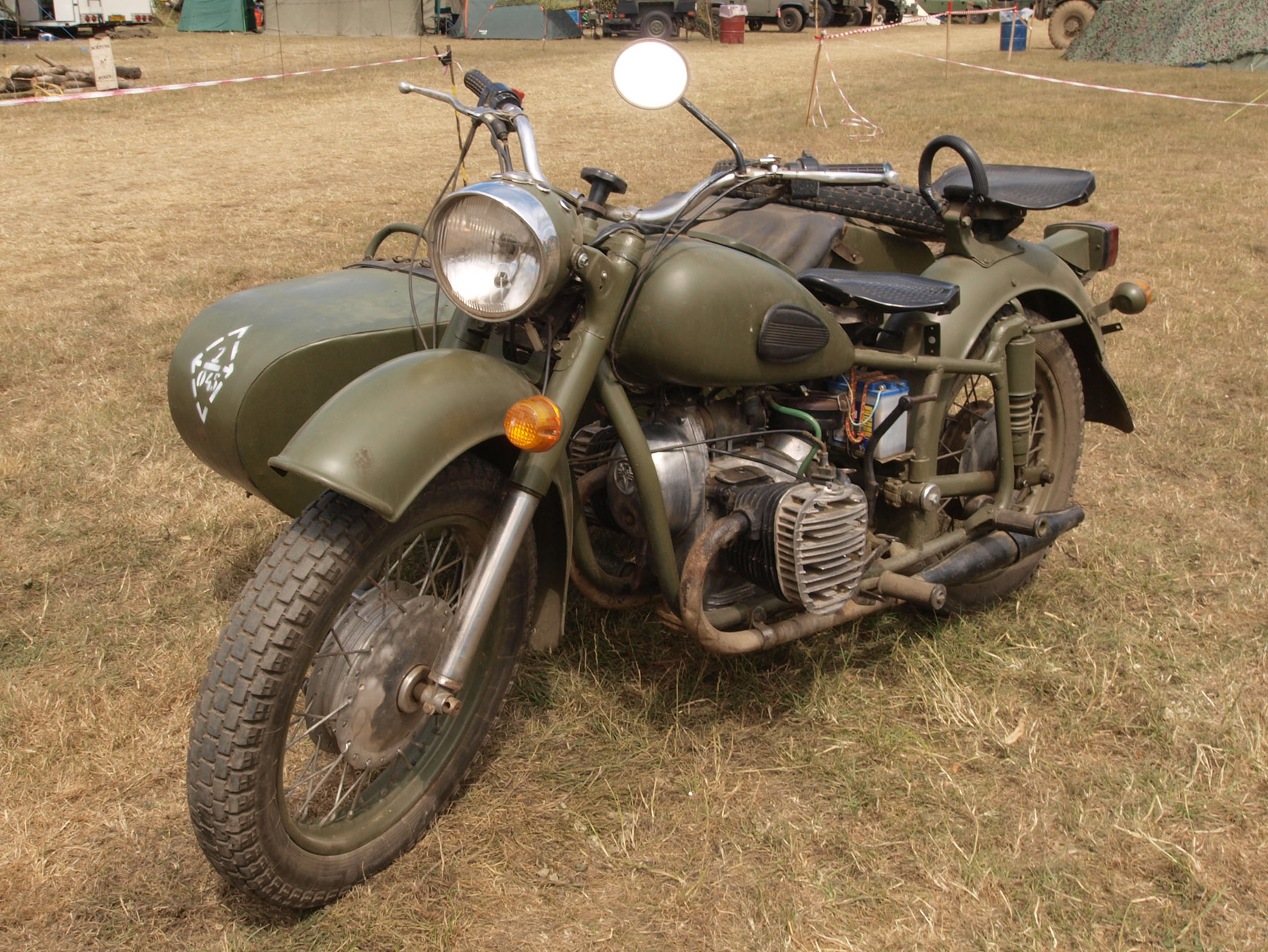 This motorcycle model, the R71, has been the most produced throughout history, currently exceeding 3,200,000 units. Today, Ural is practically the only brand that continues to make motorcycles with sidecar, which adapts mechanics and technology to the times. The latest is the Ural E Project, electric propulsion.

The vehicles of the other side

On the other side of the beaches of Normandy, and in the middle of Europe, the German army extended, where there were also vehicles that have transcended to the war age. Perhaps the best known is a Porsche and we are not talking about a 911 fighter or something similar, but about Ferdinand Porsche’s design for the Nazi army, the Volkswagen Type 1, also known as Beetle or Beetle. Although it was not used with the body we know best, but only the chassis.

In 1938, this car model was called KDF-Wagen (or Kraft Durch Freude Wagen, in German), which comes to say “the car of force through joy.” Its most used military adaptation was the VW Kübelwagen model, of which 50,000 units were manufactured, which would be the equivalent of the American Jeep but without four-wheel drive. Even so, both the engine and the traction were rear, which together with the considerable height of the axle above the ground and its reduced weight, facilitated its cross-country behavior. 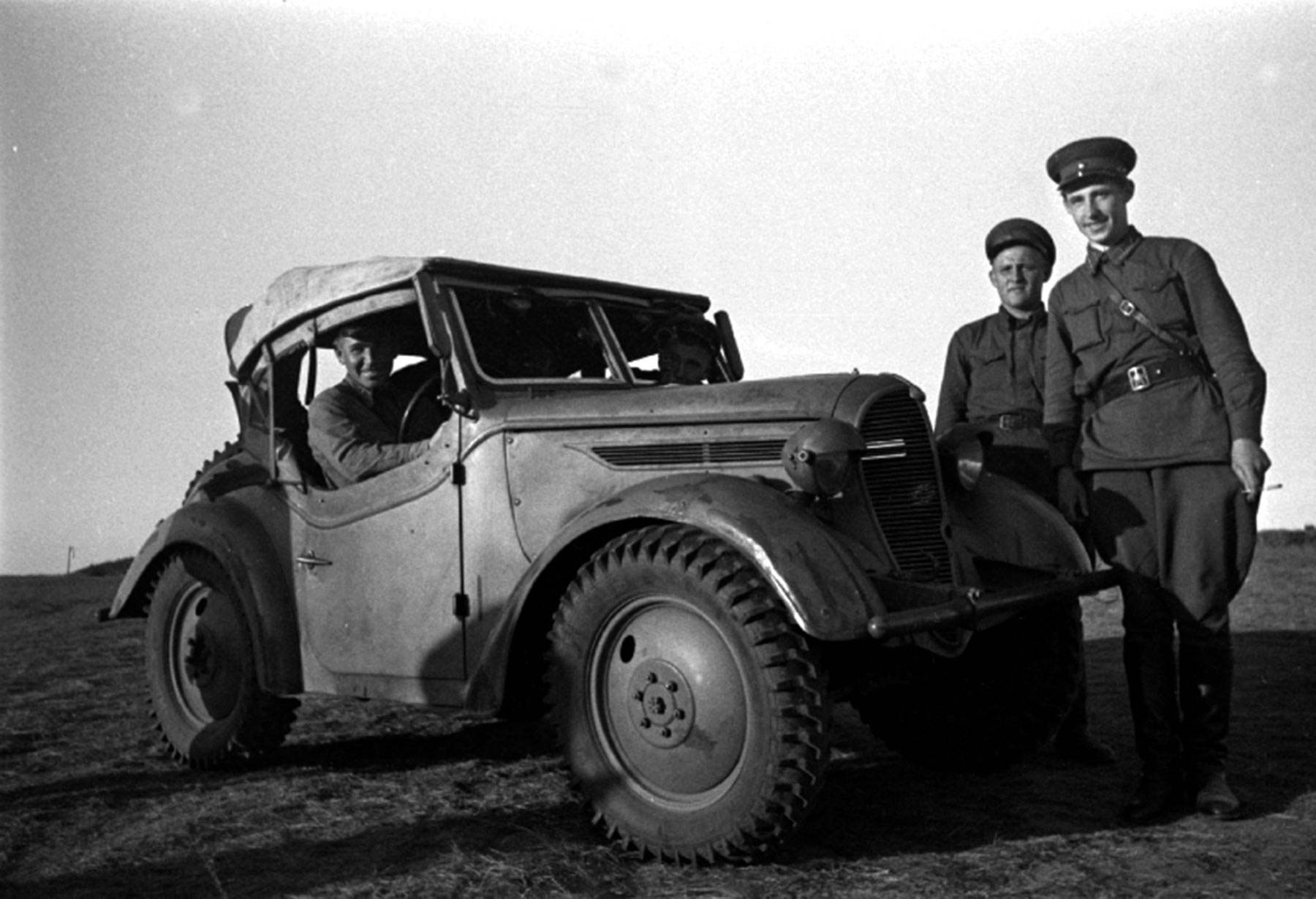 Once the war was over, large-scale chain production of the VW Type 1, the Beetle, which has been manufactured until 2003 in Mexico was resumed. The manufacturing of the Kübelwagen has also been subsequently recovered. In the 70s it was manufactured as a civil model with the name of Volkswagen Type 181, or better known as Safari.

Another German vehicle that was mass-produced was the Krupp-Protze. This is the equivalent, in terms of troop and artillery transport, of the GMC CCKW of the allies. A six-wheeled truck, with four-wheel drive and 6 × 4 independent suspensions. It was powered by an air-cooled four-cylinder Krupp M304 engine with a power of 55 hp or 60 hp. In addition, it had a relatively advanced design and came to have more than eight different configurations: mobile telephone exchange, command vehicle, troop transport plus cannon … Its only downside is that it spent too much fuel, especially compared to the Opel Blitz truck, another of the Wehrmacht emblems.

Continuing with the vehicles of the World War II Axis block, we find the Italian contribution with Fiat. The brand produced, in addition to airplanes for the contest, the Fiat 508 CM Coloniale, a light vehicle of connection and recognition, which although it did not have four-wheel drive, was designed for use in the rugged terrain of North Africa and Ethiopia. Curiously, the original model was called Torpedo 508, which despite the name, was a civil model that was first presented at the Milan Motor Show in 1932 and later adapted for military use under the name 508 CM and 508 CMC. 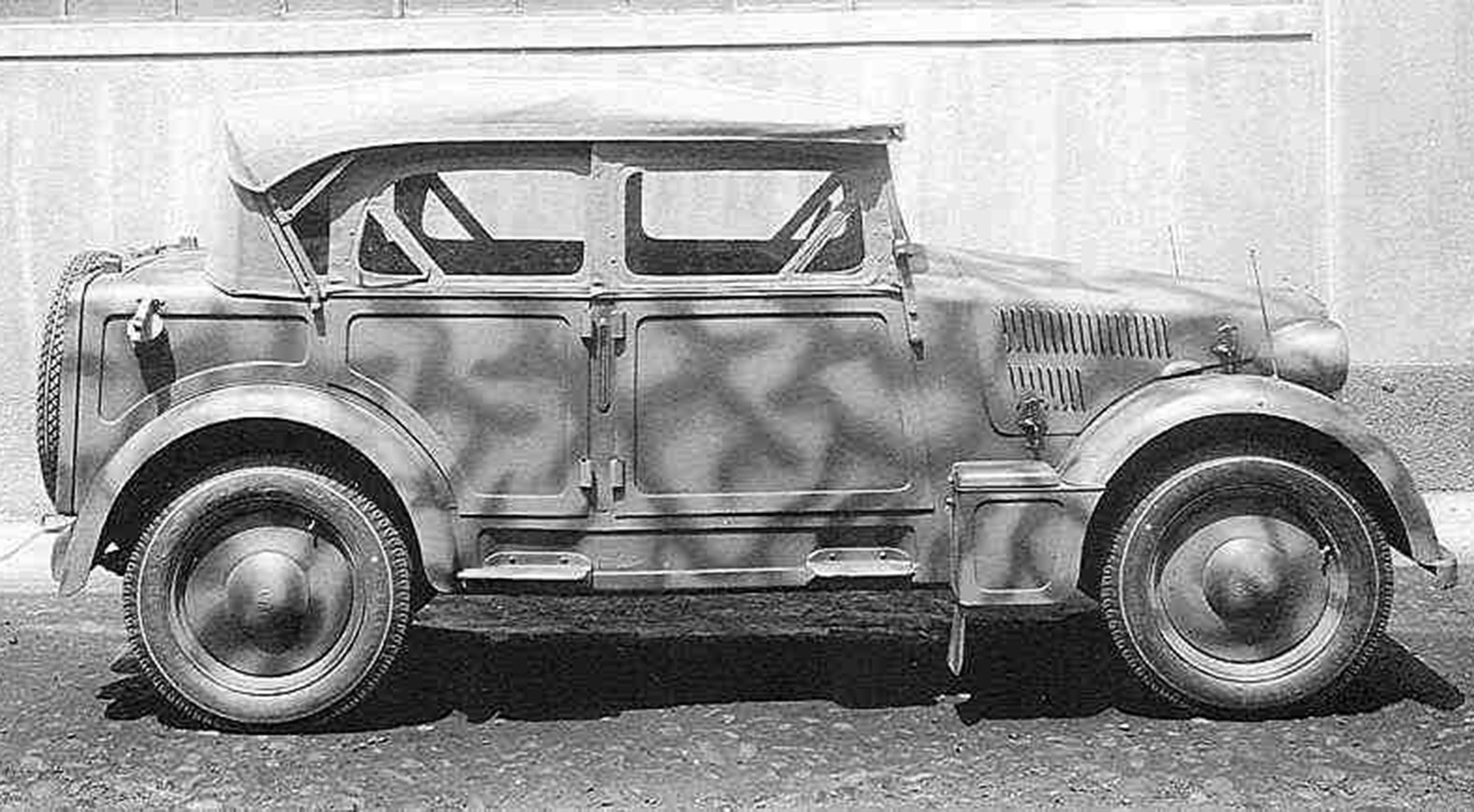 On the Asian front, the small SUV was of Japanese origin and appeared after the occupation of Manchuria, from 1937, it is the Type 95 reconnaissance vehicle, better known by its brand, Kurogane. It was a very compact SUV covered with a tarp, with space for two people in the front seats and only one person in the back area. Its air-cooled 2-cylinder V-engine was ideal for the cold of northern China during the occupation. In addition, the absence of radiator eliminated the possibility of freezing of the cooling circuit.

Messerschmitt, from fighter plane to scooter

To conclude, an example of recycling in reverse, since, unlike other industries, it went from producing weapons to making land vehicles. Messerschmitt AG was a company that produced fighters for the German army, especially the BF 109 and ME 262, but after the war, Messerschmitt KR200A, a microcar, or rather a scooter with a cabin was launched, with three wheels and two seats called Kabinenroller in Germany. It was manufactured from 1955 to 1964 and 40,000 units were sold. In addition, it holds the speed record of three-wheelers: 103 km / h. Its design is a clear heritage of the hunting cabins that the company manufactured previously.