The Toyota Prius is a benchmark in the hybrid vehicle market, as it was the first vehicle of this type that was launched to the consumer market with remarkable success. Now Toyota renews its Prius plug-in range in Europe with a larger battery and with a novelty that has been widely highlighted: the possibility of offering a sunroof. In the imagination of many people is having a car that never has to go through a gas station or a plug. With the sun, so present in our country, it should be able to circulate without problems. However, there is a reason why few brands dare with solar panels on top of the car: the performance is not enough.

The numbers of the new Prius

The new plug-in Prius has an 8,8 KWh battery, which gives 45 km of electric mode according to the WLTP cycles. It is a great improvement over the previous plug-in hybrid, whose battery had only 5.2 KWh and also did not have 5 doors. What does the solar pack offer? Basically some solar panels on the roof of the vehicle that is connected to the main battery of the car. If it is stopped, it recharges the battery, if it is in motion, it simply serves to power the auxiliary battery that gives power to systems that have nothing to do with traction (navigation, interior lights, etc.).

The data provided by Toyota is that they are panels with a power of 180 W of generation power. This is, of course, when the sun is vertical. But then they give an interesting fact that makes sense and is that a whole day stopped provides a range of 5 km. And a year this would be about 1000 km of autonomy (you have to take into account that it is not always stopped, that in winter there are fewer hours of light than in summer, which when there are clouds does not produce, etc.). Making this calculation is very complicated, and Toyota does not provide many details. In any case, we will assume that the calculations are correct always taking into account that the automotive industry tends to be optimistic with consumption and ranges.

How much could we save with these solar panels? Taking into account that each Km traveled costs the Prius 200 Wh (8.8 KWh / 45 Km), the 1000 Km per year would save 200 kWh. How many euros are that? It depends on where the load is made. If it is charged at home, it could vary, depending on the time range and rate selected, from 13.6 euros to 30 euros. If it is loaded in electrolineras would be 100 euros. And if it were simply savings on gasoline, it would be around 60 euros, according to the maximum consumption indicated by Toyota . Therefore, considering that the average life of cars in Spain is around 14 years, we would be talking about fuel savings that would go from 190 euros to 1,400 euros. This, always remembering, that we rely on Toyota’s calculations, which are surely somewhat optimistic. 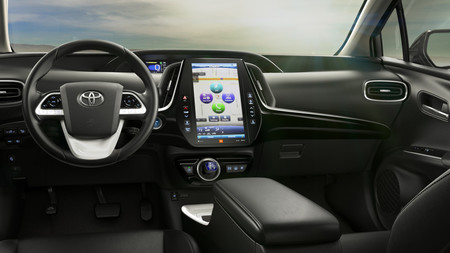 Therefore the solar panel on the roof of the car will only be worth it if it costs less than 1,400 euros (if we never plan to plug it in, which does not make much sense) or less than 190 euros if we consider that we will always try to pull with electric charge and plugging in . How much does the option cost? It is not known. On the one hand, Toyota has not yet launched the car in our country. In others in Europe yes, but still without the solar option. And it is also a separate model, with extra equipment, which will be difficult to determine the real price. But apparently in Japan, it will be around 2,000 euros.

Almost simultaneously with the announcement of the presentation of the new plug-in Prius in Europe, Toyota announced a new project in collaboration with Sharp Corporation and NEDO, to offer experimental solar panels and higher performance in its plug-in Prius model. The novelties of the sunroof are two in this case: on the one hand the panels are not limited to the roof but also cover the hood and the rear moon; and on the other hand the technology of the solar cells novel with greater performance. 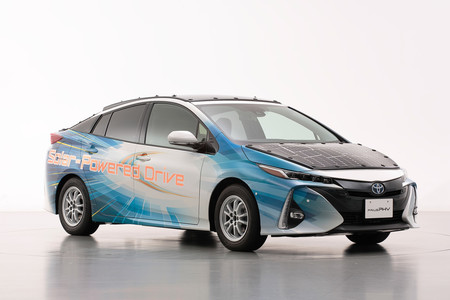 This causes the panels to provide 860 W of power, and autonomy with a charging day of 44.5 km and 56.3 km in circulation (the battery remains the same, 8.8 KWh, but the cycle of Japanese approval is less demanding than the WLTP). These are words, we are talking about 7.4 times more autonomy, which would be equivalent to savings in the useful life of the vehicle that would go from 1,400 euros to 10,360 euros. Of course, this direct extrapolation of savings no longer makes so much sense. The calculations of the 1,000 km of autonomy that Toyota gave were based on a very slow load.

Now with the car parked for a couple of days, I would already have a full battery and no new savings would occur until it circulated again. So if the calculations with the current model already contained some leap of faith, with this much more. However, we must not forget that this is an experiment, a project. The panels that are being used are not commercial, they cannot be mass-produced at a reasonable price. It should also be seen if the panels on the front and rear are a safety issue. But they do indicate that solar charging may be interesting in the future if these technical problems are solved.